Brooder House for poultry and duck is a very popular and successful government programme in Tripura. since 2008-09 to till date. BLOCK LEVEL BROODER HOUSE programme is going on all over the state.

Actually Brooder House is the concept where handling the newly born chicks without the aid of hens (artificially ) by means of a temperature controlled brooder ( foster mother ).This Brooder House has several advantages over the natural method, which are:-

Chicks may be reared at any time of the seasons, Thousands of chicks may be brooded by a single person, Speacially for women it’s a very good job because easy to handle and manage the brooding system.

Sanitary condition may be controlled. Temperature may be regulated. Feeding may be undertaken according to plan. Easy to vaccinate all the chicks at a time. Easy to observe the condition of birds and their faces for any sort of abnormality. Labour cost become minimum. Beneficiary can take Brooder House duty as a part time job including his normal other job. Mortality rate becomes minimum and profit percentage is higher. 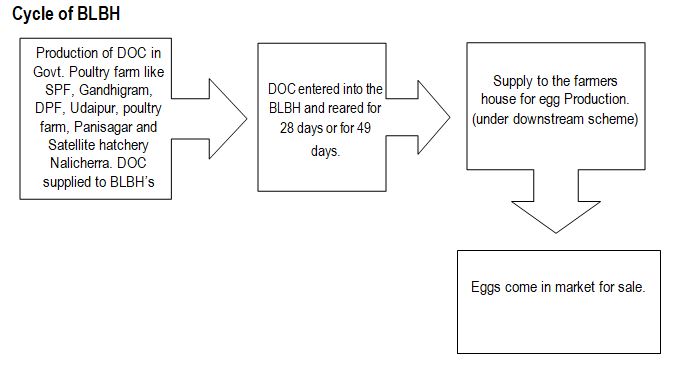 At present state govt” requirement of BLBH is 290 nos ( 58 nos block x 5 nos BLBH in each block ),Existing BLBH is 80 nos , under construction BLBH is 30 nos  and 26 nos BLBH construction completed but not yet handed over. 154 nos BLBH will be construct ( under proposal).

To increase the egg production in the State, during last two,  five year plan period (10th and 11th),the strategy adopted by the Govt. was to enhance the household egg production through rearing of Low Input Technology ( LIT ) birds. Because the country breed available in the state, their production capacity is not satisfactory moreover hens go for natural brooding three to four times per year and they can brood only 12 -15 baby chicks  per natural brooding.

To overcome this problem a lot of infrastructure were either created or strengthened by the department in different parts of the state like establishment of Block Level Brooder Houses ( BLBH ) in each block. The idea was to rear the day old chicks ( DOC ) upto 49 days in the BLBHs under intensive care along with necessary vaccination/deworming coverage so that when the birds are supplied to the downstream the survibality become much higher. As a result the per capita availability of eggs has increased from 31 eggs/head/year in 2001-02 to60 eggs /head /year in ( provisional )  2016-17.

Meanwhile, due to change in the life style/ food habit/ increased purchased capacity of the people the demand for egg has gone much higher. Beside this, under ‘Supplementary nutrition programme”, along with other nutrients each child has to be provided with an egg twice in a week as animal source protein which is very much essential for the growing child. In mid day meal Scheme 8 nos district covered and total 522472 nos students covered under this scheme. In SNP Scheme Expectant mother covered 32118 nos and Nursing mother covered 53095. So demand of egg is increasing day by day. Considering this, Department has targeted to produce 58 eggs/ head/ year by the end of 12th five year plan. BLBH is one vital source of production of egg.

Accordingly, there is enoromous scope by establishing BLBH in each Block for making improvement in the egg sector by way of engaging rural people in the process of egg production for generation of self employment to cater the growing demand of egg in the state.

Existing BLBHs are 1250 sq. ft each and are designed to accommodate 1500 chicks up to 49 days @0.75sq.ft per chicks. Accordingly the rearer of the BLBHs shall have the scope to rear 9000 chicks per year in 6 batches so that the project become economically viable and the engaged unemployed youths become self employed.

At present maximum BLBHs are constructed under MGNREGA fund and total cost of the project is Rs.14,54,220.00 including cost of Brooder House, cost of Generator shed and cost of installation of generator.

Total fund is placed to either Block or R.D Department to construct the whole set up. After completion of Brooder House, handed over the House to the A.R.D.D Department to start the project.

At that time concerned Panchayet selected 2 or 3 nos unemployed youths (beneficiary) to run the Brooder House successfully though they can become self employed. Veterinary officer of that area ( V.H/ V.D ) act as a supervising officer of that particular BLBH. First time Department provide working capital to rear 1500 nos Day old chicks for 49 days. At present 76 nos BLBH is running and approximate 228 nos (3 nos for each BLBH) beneficiary earning average Rs.4000 to 5000 each person from each batch. In future 642 nos more unemployed youth will be engage in this project will become self employed.

In this rearing period (49 days) deworming and all vaccination provide to the chicks specially R2B vaccine (Ranikhet) is given at 6th week of age and after that supply of chicks started. Following this method it is observed that mortality rate become lower when chicks entered to the farmers house.

In downstream schemes 45 nos chicks (LIT variety) of 28 days or 49 days of age supplied to the beneficiary from the BLBH. Poultry grower ration may be procured by the concerned beneficiary to provide in limited quantity to the birds initially, which will be tapered slowly over a period of 15 days to change the feeding habit and later on the birds will survive on scavenging. Necessary treatment /vaccination/Deworming etc will be carried out by ARDD through its field level institution.

From each batch of chicks rearing, beneficiary can sale 1425 nos chicks out of 1500 chicks (5% mortality in BLBH) ,also can sale gunny bags and manure. All technical guidance given by Veterinarian to rear scientifically and overall it is a profitable business.

In farmers house, grower birds  become adult at the age of 150 days ( 5 months )  and  start laying eggs. To rear these birds Department assist the farmers to build a night shelter and to provide feeder/waterer etc. The eggs are reddish in colour and size is also very good. Demand of this egg is very high.

One hen produce approximate 130-150 eggs per year and 1.5 kg meat production from each spent hen. From one poultry unit farmer consume egg for their own family and also sale extra eggs in the market. Few fertile eggs also sale for hatching purpose, which demand is high in village level. Male birds sale for meat purpose.

In this way the beneficiary who are rearing chicks in the Brooder House they are financially benefited as well as when birds go to farmers house, farmers also get benefit by rearing the birds.

Performance of Govt. Poultry Farm during the year 2019-20.

Performance of Govt. Poultry Farm during the year 2018-19.

Performance of Govt. Poultry farm during the year 2017-18.

In the year 2016-17  Department covered 3555 nos and 3445 nos  BPL families under Backyard poultry development scheme. Both the scheme is undergoing and after completion of scheme,  huge nos of eggs and poultry meat will be produced in the farmers house which will be flow in the market and financially farmers will become self employed.

Performance of Govt. Poultry farm during the year 2016-17.

performance of the Govt. Duck breeding Farms during the year 2019-20

performance of the Govt. Duck breeding Farms during the year 2018-19.

performance of the Govt. Duck breeding Farms during the year 2017-18.

Performance of the Govt. Duck breeding Farms during the year 2016-17